We recently completed this Delafield, Wisconsin bathroom remodel. We are excited to share all the details of this boho bathroom renovation, including the before and after pictures.

Remodeling this 1980s bathroom was on the homeowners wish list. The space had plenty of issues – the layout was awkward, the style was outdated, and it didn’t function well for this couple.

The biggest issue: it was like a labyrinth, with a complicated layout of walls and doors. The space was boxy, tight and cramped. The vanity was situated right inside the doorway of the bathroom. There wasn’t much walkway room if someone was standing at the sink. To the left of the vanity was the master closet and to the right of the vanity was the rest of the bathroom. The bathtub was sandwiched between two closets. The walk-in shower was dark and very small at 3’x3’. The bathroom also led into the master closet. The homeowners wanted this bathroom to be a true master suite. The solution was to close off the door to the guest bedroom and separate the closet and bathroom into two spaces.

Check out the floor plan before and after: 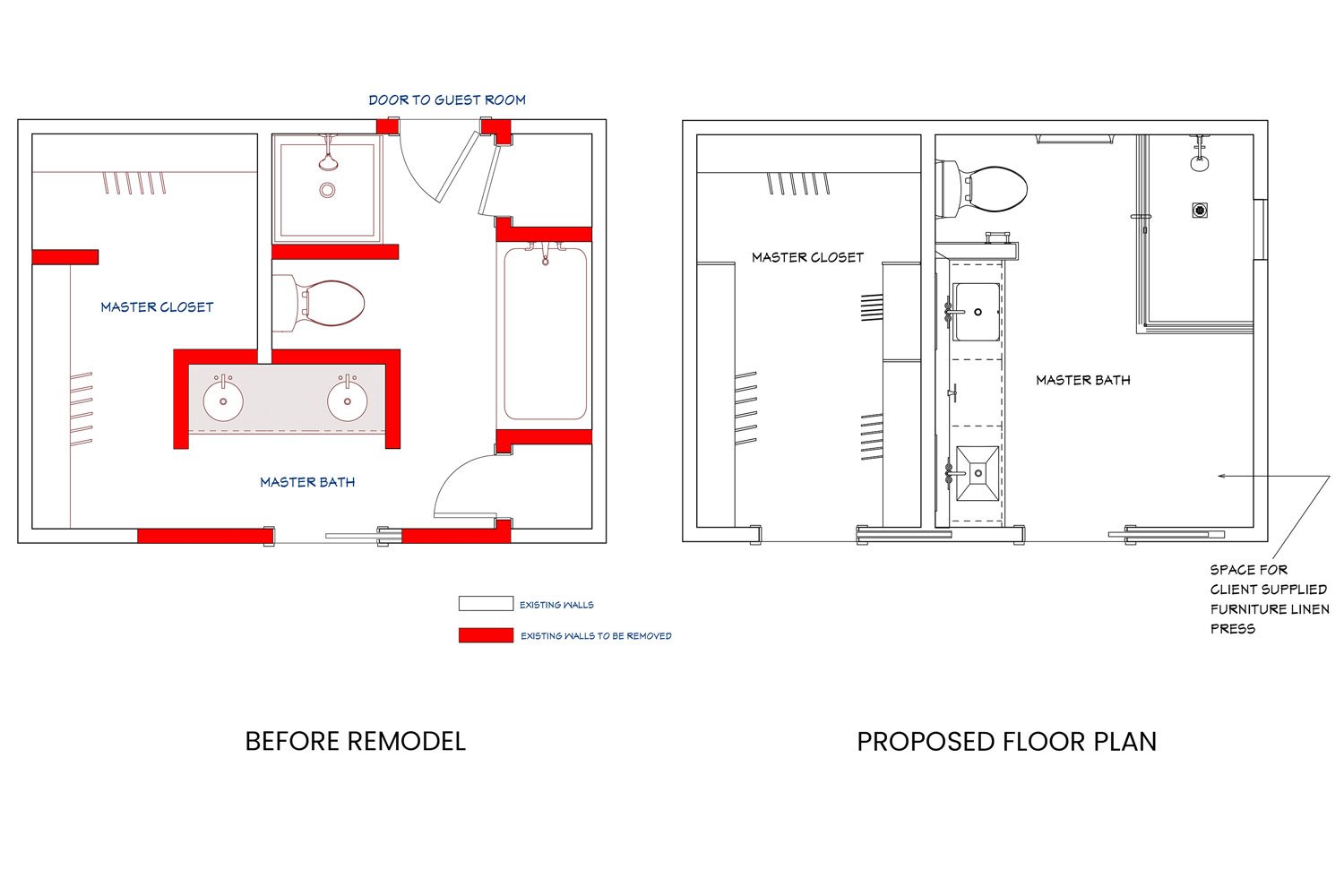 The old bathroom had a small 3’x3’ shower. The homeowners asked for a large walk-in glass shower. They wanted it to feel open and airy instead of closed in and tight. There was a large footprint for this bathroom, but everything was in tight spaces.

We gave them a large walk-in shower featuring a bold Dreamline Shower enclosure. We used a white hexagon tile for the niche and the shower floor. The space is warmed up with luxury vinyl plank wood flooring. 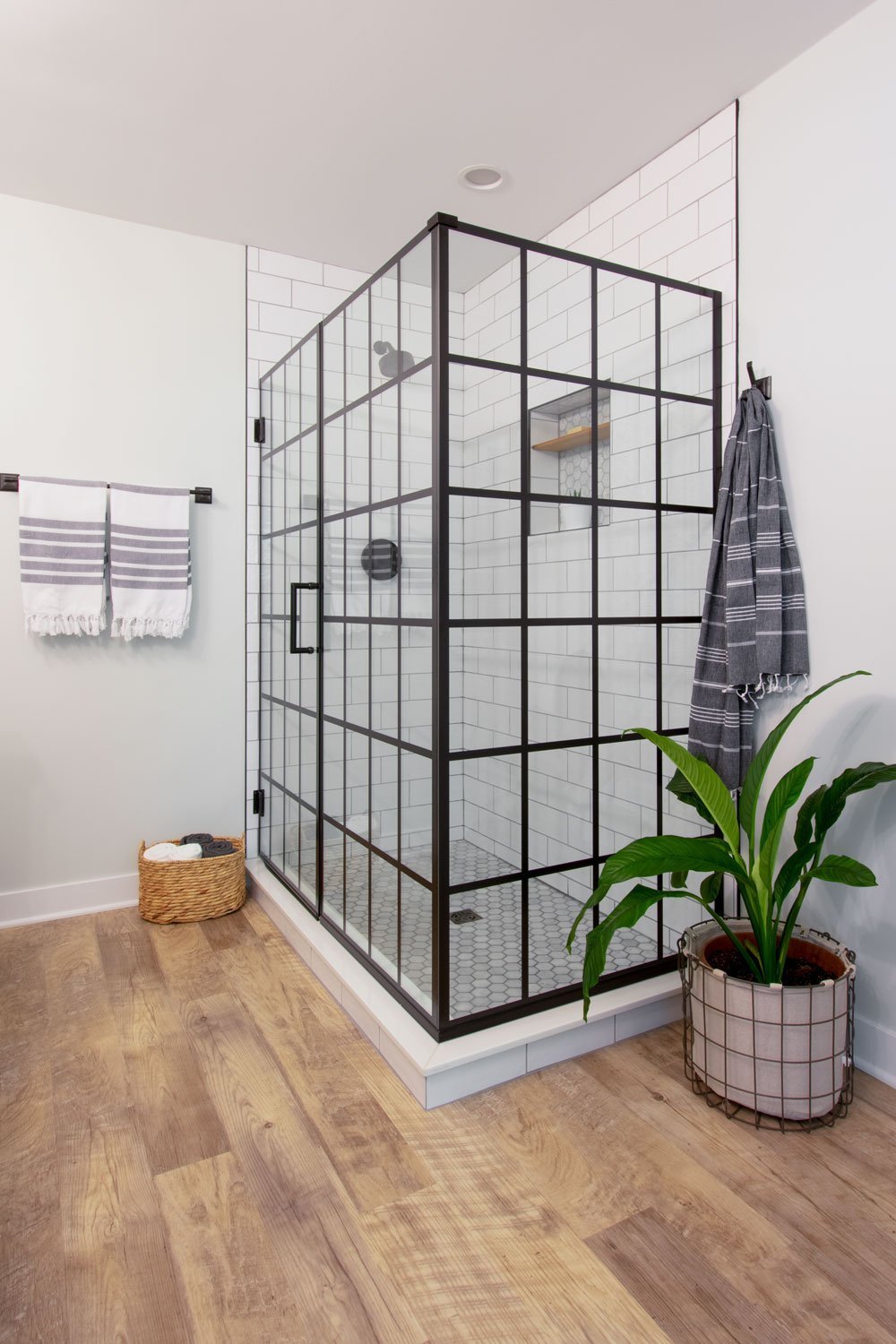 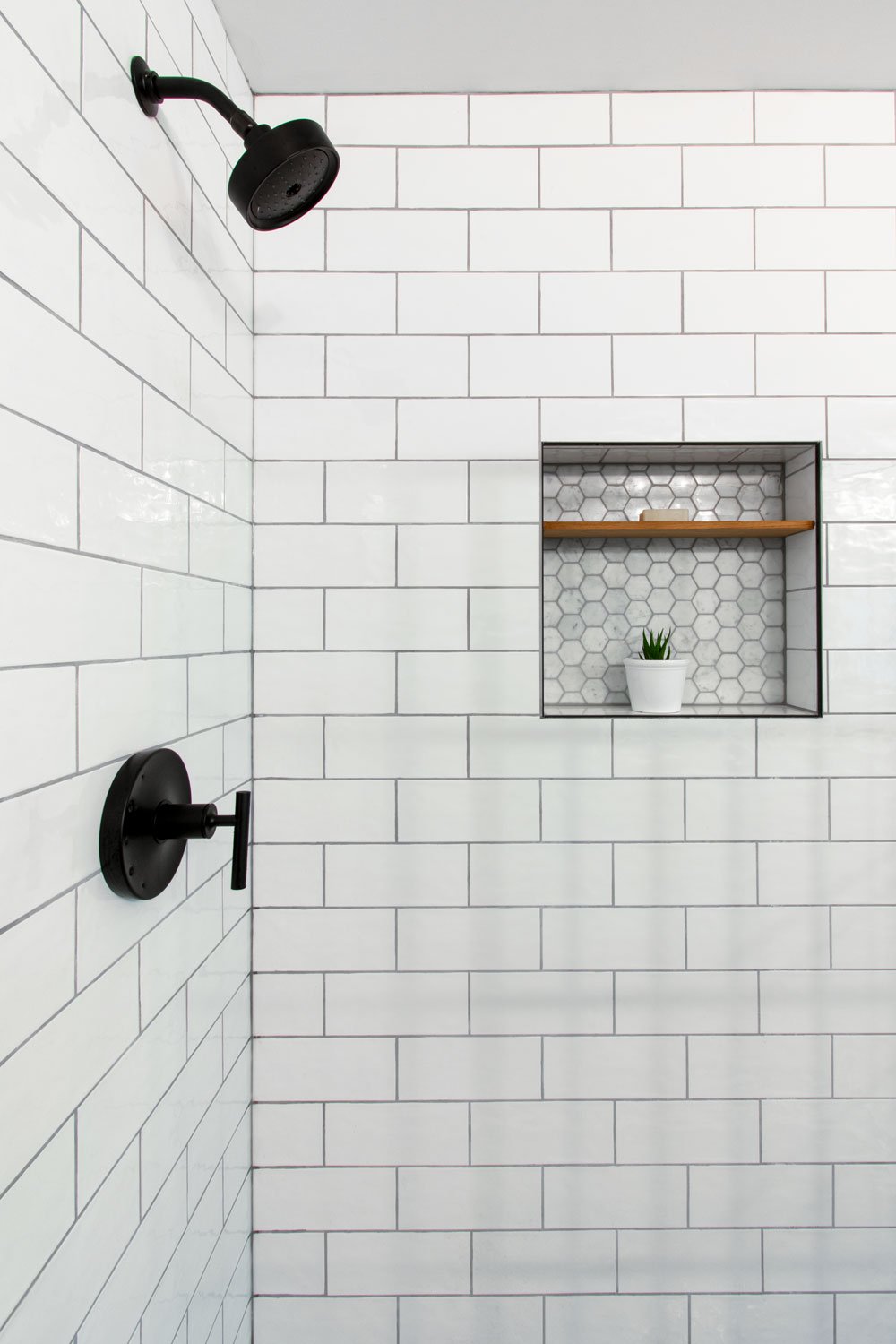 The homeowners asked for more functional storage and to have space for two people to use the bathroom at the same time. The solution was a longer double vanity with more storage and counter space than the previous design. We tucked the toilet in the far corner of the room behind a half wall. A pocket door into the bedroom also maximizes space in the room. The wide walkway in the center of the room gives the couple plenty of space. Carrara marble hexagon tile was used as a backsplash, in addition to the shower floor and shower niche.

The original bathroom had one doorway into the bathroom/closet. The walkways were tight and the room was dark. Functionality was improved with two separate entries – one door for the master closet and one to the bathroom. We installed pocket doors for each doorway to keep a streamlined look and save space. This new layout is more functional and is a better use of the space. Natural light from the bedroom pours into the bath and closet.

This master bath is a light, airy space. The new style is boho chic with industrial touches, warm wood accents, and a vintage black and white color scheme.

This Delafield bathroom remodel was awarded a GOLD ‘Remodeler of the Year’ award from the Milwaukee National Association of the Remodeling Industry (NARI) in 2019.

If you already have a project in mind, we need some details to get started. Filling out this form accurately will allow us to give you the best customer experience possible.